The Dreamhold is interactive fiction — a classic text adventure. No graphics! No point-and-click! You type your commands, and read what happens next.

The Dreamhold is designed for people who have never played IF before. It introduces the common commands and mindset of text adventures, one step at a time. There’s an extensive help system describing standard IF commands, as well as dynamic hints which pop up whenever you seem to be stuck.

I’ve tried to create a game which rewards many species of adventurer: the inexperienced newcomer, the puzzle-hurdler, the casual tourist, the meticulous explorer, the wild experimenter, the seeker after nuances and implications.

The Dreamhold is available now for iPad, iPhone, and iPod touch. For free!

The Dreamhold was originally released as a downloadable game file in 2004. You can still play it on my web site. (Although you won’t get the nifty in-game map, or the achievements. Those are iOS exclusives.)

If the idea of interactive fiction is new or strange to you, take a look at this quick reference card. It’s not a complete manual — it’s just a guide to what IF commands look like. Once you get used to the pattern, it’s pretty easy to express what you want to do.

(Click for PDF version of the card. More versions and translations available at the People’s Republic of Interactive Fiction. Print ’em out and pass ’em around. Card text by Andrew Plotkin; design by Lea Albaugh; licensed CC BY-SA.)

The Dreamhold was built with Inform 6, a free text-adventure development language created by Graham Nelson. (If you’re looking to create IF today, you might be more interested by Inform 7; Graham has redesigned the language from the concept level up. It’s not what you’re expecting.)

The iOS interpreter is iOS Fizmo, an open-source interactive fiction interpreter. It combines iOS Glk (an IF display library by Andrew Plotkin) and Fizmo (a general-purpose IF interpreter by Christoph Ender). If this game turns out to be a hit, I intend to release iOS editions of my other well-known works (Shade, Spider and Web, and so on.) And, of course, there will be the eventual release of Hadean Lands.

Want to release your own IF games with iOS Fizmo? You have to be a registered iOS developer, and know your way around Xcode, but it’s not too difficult. Check out the Git project and take a look at the procedure. (Currently only Z-code games are supported. I will soon have iOS Glulxe ready, for Glulx games.) 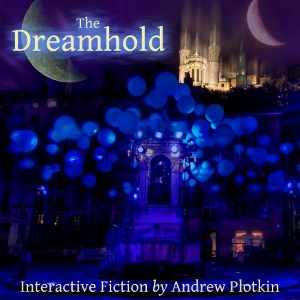 The cover art is based on a photograph by Trey Ratcliff: The Festival of Lights in Lyon (CC by-nc-sa). I remixed it with images of Mercury and Io (NASA, not copyrighted). The composite image is CC by-nc-sa.